To celebrate Black History Month in 2018, children took part in different workshops.  Children in Reception to Year 2 were treated to performances by the Iroko Theatre Company and children in Years 3 to 6 took part in a Black Heroes workshop, run by Bigfoot Arts Education.

Our annual Black History Month competition for pupils took place again.  Children from Reception to Year 2 were invited to draw, paint, create or make a model of a black saint who has followed in Jesus’ footsteps and children in Years 3 to 6 were invited to research and create a project to remember the brave black and asian men who fought during WW1, to coincide with the centenary of the end of WWI.

2018 Competition Winner and Recipient of the Christiana Sosah Cup 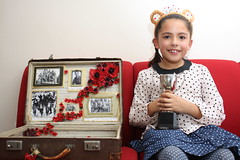 To celebrate Black History Month in 2017, we invited our pupils to celebrate the Notting Hill Carnival.  We chose this local project in remembrance of the residents of the Grenfell Tower.

Of course, the children at St. Georges exceeded our expectations with their innovative entries and prizes were awarded as follows:

2017 Competition Winner and Recipient of the Christiana Sosah Cup

Why is it called the Christiana Sosah Cup?

Christiana Sosah was an avid supporter of St George's PSA and was actively involved in supporting PSA events at the school. She worked in London as an Executive Assistant with various multi-national corporations. Sadly, she passed away on 14th October 2010, during Black History Month.

Christiana Sosah was born on 22nd November 1963 in Koforidua, Ghana. She was married to Charles Kingsley Addo and had two daughters, Chloe and Christabelle. Christabelle was a pupil at St George's until July 2013. Throughout her 46 years, Christiana's life was shaped around education, love for her family and getting the best education for her children. Christiana completed her primary and secondary education in Ghana. She attended the Aburi Women's Training College, where she became a qualified teacher in 1983. She started work with the United Nations High Commissioner for Refugees in Geneva, before relocating to London.